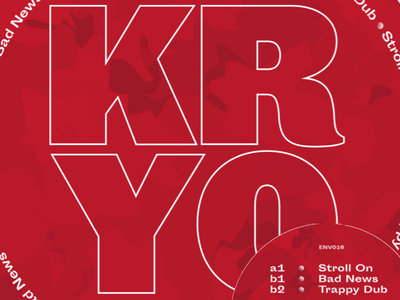 Having found one of the best working partnerships with the SubtleFM team through this release it is with a strong positive attitude we bring you this release.

Kryo is one of the most under rated producers and this release seeing wax is testament to people overlooking quality for 'name brands'.

We have been battering Bad News for the best part of 1year. With Stroll on and Trappy Dub appearing a little time after the release was pencilled almost instantly.

This release has been seeing plays from the a whole host of amazing Dubstep DJ's.

THIS RELEASE IS BEING DISTRIBUTED VIA UNEARTHED - Emailing/Facebook/Instagram contact with EA with changes of address or order will not see this being resolved. Please get it right the first time we don't want anyone to miss out!

IF YOU NEED IT ( LISTEN HERE - soundcloud.com/encryptedaudio/env016-kryo-out-now )