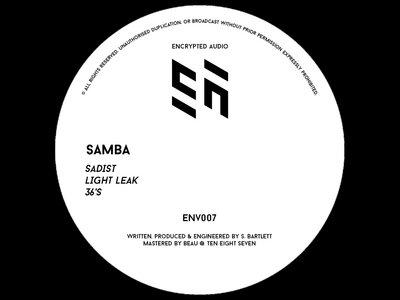 The Seventh instalment from Encrypted Audio is none other than London based Samba (Sam Bartlett).

Samba delivers finely crafted, raw and edgy music exploring the boundaries of the bass music genre. With releases on 140 Ninja as well as a forthcoming 12” vinyl on other Key Dubstep footprints, Samba’s output often delves deep into the fundamentals of stripped-back rhythm, with skittering off-kilter musical elements and bass that rattles the back of your skull.

Samba is a rapidly rising star in the expanding universe of new-talent and one to keep an eye on.

This release see's the very best of his diversity. Sadist / Light Leak & 36's.

Mixed and Engineered by Sam Bartlett
Mastered by Beau @TenEightSevenMastering