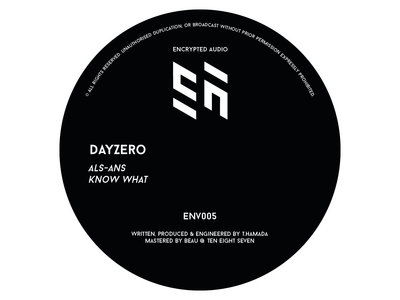 The fifth instalment from Encrypted Audio see's one of our Japanese contingent showcase their own take on the EA sound. Dayzero (Tsuyoshi Hamada).

'Dayz' came onto the roster in the last wave with Samba / Trisco and close friend Helktram (ENV006), hailing from Japan it is clear the sound there is thriving and each artist brings a fresh forward thinking approach to the bass music filed.
With active support from scene pioneers such as Goth Trad and Truth his sound has been a feature at nearly every night in Japan around the 140 spectrum.
A strong emphasis on rolling bass and hard kick patterned sequences evolving around warped top lines and vocal phrasing.

Mixed and Engineered by Tsuyoshi Hamada
Mastered by Beau @TenEightSevenMastering

THIS IS BANDCAMP EXCLUSIVE WITH WAV DOWNLOAD, WAV DOWNLOAD WILL NOT BE AVAILABLE VIA ANY OTHER PURCHASE SITE. 100Units only.
WAV download will be sent out 1day after order is made.