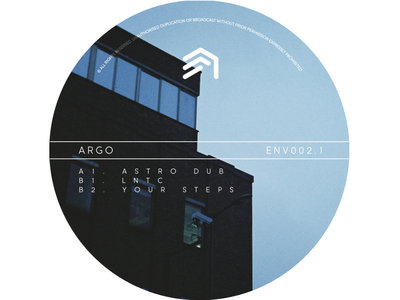 Argo needs zero introduction to the tuned in listener of the Dubstep Genre. This release alone has seen support and heavy rotation from Youngsta, Distance, J:Kenzo, Ntype, Bukez Finezt, Samba etc etc etc. The list is endless, over the past 12months it would be easier to list those who have not supported this release.
Not only has Argo been gaining support with this release from the Dubstep Elite, Grime champions such as Spooky have clocked onto the sound and are showing Argo's style to the Grime masses.

The Story with Argo runs deeper than this, For Deafblind and Content, Argo was one of the core artists they scoped for EA and having signed the young Parisian at 17 he has grown over the last 5 years to being one of the most prolific Dubstep producers of this modern era, with an Ear that manages to find sub tones in a crisp packet its been a joy to bring him back for his Second instalment on EA. ( Not only that the guy slayed the Photography for his own release! how anyone else who has support him has not took advantage of this mans talents is beyond us! ;) No complaints from us here though )

A. Astro Dub
B. LNTC
BB. Your Steps